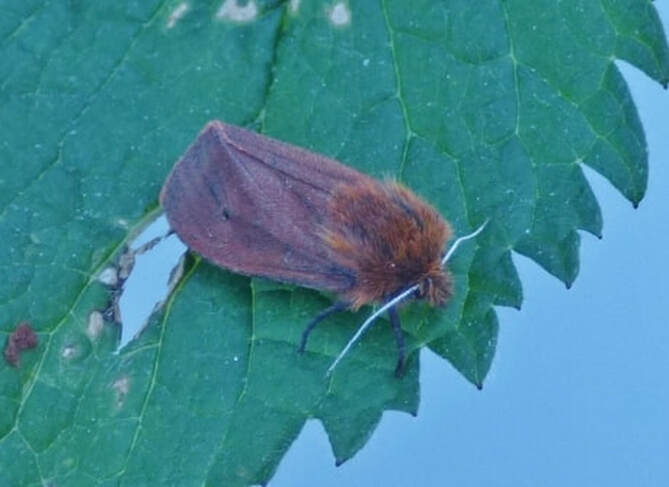 ​We found this small moth with the Punk hair-cut on the Wolves Carving when we were doing work in that area earlier in the year. It’s a Ruby Tiger moth and this is the first time we’ve recorded it on the Green.

Apparently it is quite common in Nottinghamshire and most of the UK, but getting rarer in the north. It has a wingspan of around 34mm and gets its name from the colour of its forewings which are deep, ruby red in southern variants, but a darker red in the north. In some light conditions the wings have a metallic tinge to them.

It can be found almost anywhere but tends to favour open countryside, coastal areas, moorland and heath so it’s a bit of a mystery why it comes to be on the Millennium Green. One possible answer is that three of the Ruby Tiger caterpillar’s favourite food plants are abundant on the Green. Plantain is one such food source and we’ve had a plentiful crop of Ribwort Plantain in the meadow with Doc and Dandelion being in good supply elsewhere.

There’s every chance that it is breeding on the Green so we’ll keep a good look-out for Ruby Tigers next year.